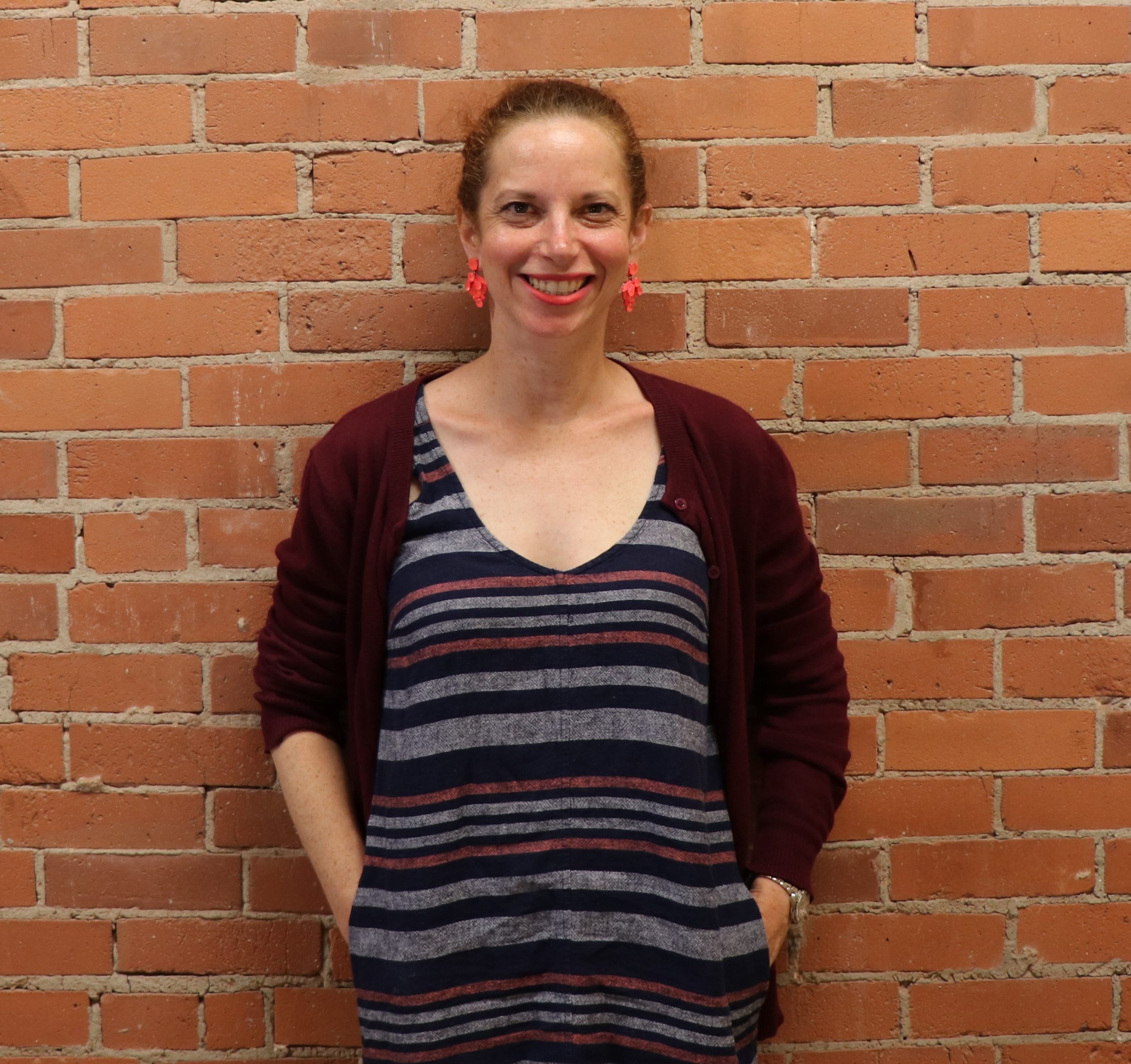 In honour of Filipino heritage month, a new commemorative month in Canada, Rebecca organized an event that was held at the Canadian Museum of Immigration at Pier 21. The event included a film presentation and a panel with the Filipino film makers and movie subjects from Labrador. It also included choir and dance performances, an artist’s installation as well as authentic food to taste, which was all created and performed by the local Haligonian Filipino community.

Rebecca recognized the event would be more powerful if various modes of communication could help to express elements of Filipino culture in the Canadian context. According to Halliday’s (1978) theorization of the social functions of language, “a mode is understood as an outcome of the cultural shaping of a material. The resources come to display regularities through the ways in which people use them. In other words, in a specific context (time and place) modes are shaped by the daily social interaction of people” (pg. 22). This compilation of various modes (oral, visual, spatial, gestural, etc) as a reflection of Filipino heritage worked together with the social interaction of attendees to fully immerse the makers and the audience in understanding  and articulating important elements of culture, thus reflecting that language is always socially situated. Listen below to Rebecca describe the synergy of this event.

Check out this link to the Canadian Museum of Immigration at Pier 21 | Musée canadien de l’immigration du Quai 21 available in English and French: https://pier21.ca/ 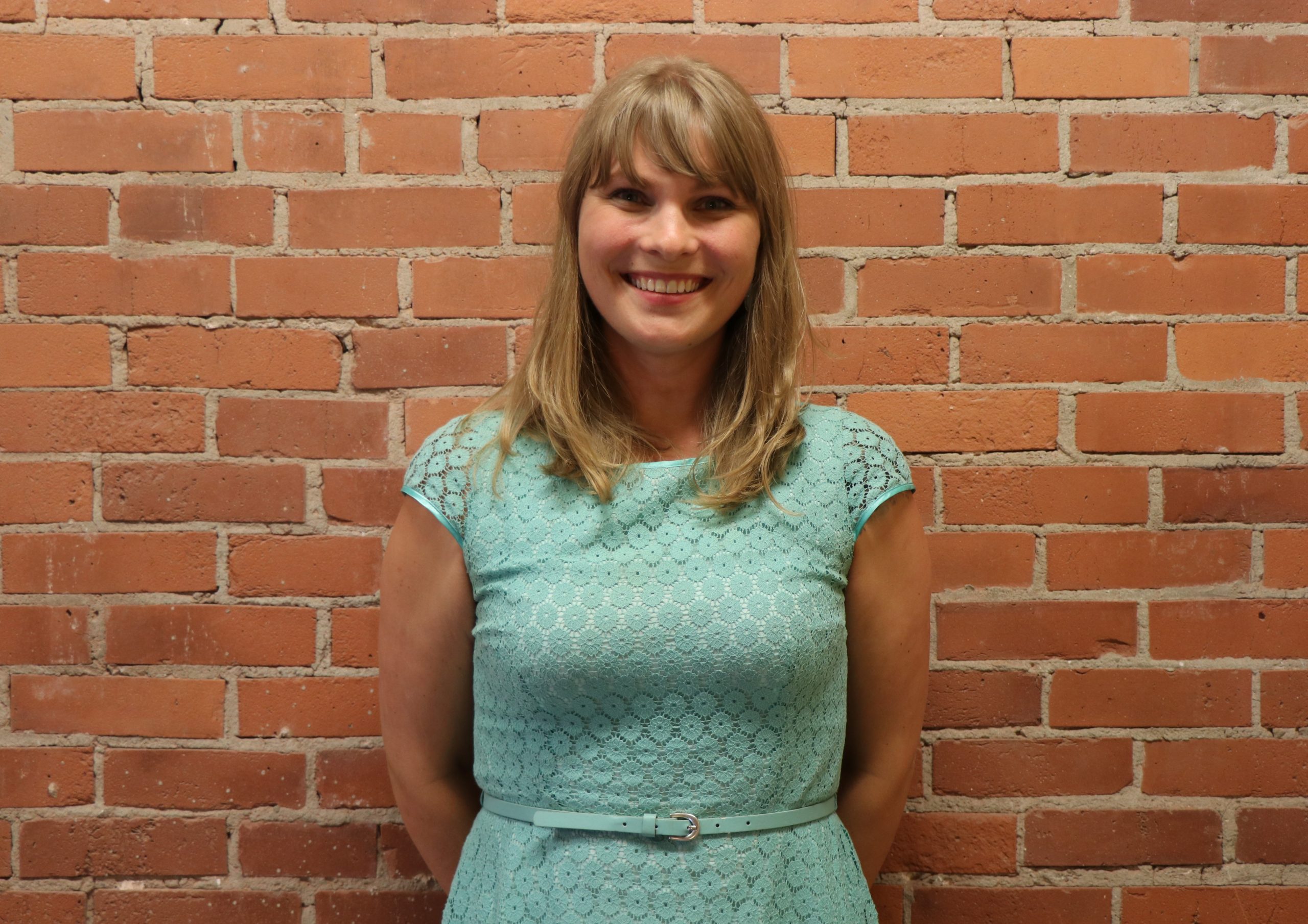 Kristine highlights Refuge Canada, an exhibit created by Pier 21 to represent what it means to become a refugee. The idea that nobody wants to be a refugee, but anyone can become one depending on their circumstances is brought to life through re-enactment, stories, and videos.

The end of the exhibit allowed for attendees to share their experiences of how refugees have contributed to their own communities. According to Thibaut and Curwood (2018), “technologies not only have expanded the opportunities for meaning making but have also shaped the relationship between the writer and the text, allowing the author to also become a designer and producer” (p. 49). These adult learners did not simply move through the exhibit passively, but rather they were able to develop their own understanding through ongoing interaction with the exhibit, for example, using their own life experiences, through an interactive computer program, they found out whether or not they would have been a refugee in another time and place. These adult learners at the end of Refuge Canada were asked to comment in writing on their own personal understanding and experience with refugees’ contributions to Canada and the world. Listen below to Kristine illuminate the Refuge Canada experience.

Canadian Museum of Immigration at Pier 21

Pier 21 was an active Canadian immigration port turned museum in 1999. During its years of operation as an immigration port, Pier 21 saw around one million immigrants come through to settle in Canada. Watch the video below to learn more about Pier 21’s history and why it was one of the most popular ports at the time, its various sections, and the museum’s current exhibits.

Watch the following video to learn about and see a dining hall on a ship hosting various groups of travellers.

During the tour, museum visitors stop in front of a display of immigrants’ baggage. Each piece of luggage holds a unique story of immigrating and finding home. The tour guide at Pier 21 shares four different immigration stories with her group of museumgoers, explaining what and how much we can learn from the shape and size of the luggage. In the following video, we learn that people immigrate for various reasons. Some immigrate looking for work or new business opportunities while some immigrate looking for safe refuge.

Museums offer a world of experience and knowledge to visitors. This type of knowledge can expand world views, personal perspectives, and drive forth people’s passion for working for the greater good of all. Kress states, “knowledge is seen not as the outcome of processes regulated by power and authority but of every day, entirely banal processes of meaning-making by individuals in their engagement with the world” (2010, p. 174). Kress (2010) expands on these comments and deepens the conversation to include identity formation through knowledge. Kress (2010) believes that identity is continuously changing and developing through active engagement with the world. Feeley takes the conversation around knowledge, power, and identity and writes to include literacy education as something vital for identity formation. Feeley (2012) writes about literacy and power from the “equality studies and new literacy studies perspective that defines literacy as a form of social practice with powerful potential for individual and collective change” (p.133). Museums, in their way of engaging people in various topics and essential moments in history, thus, aid in the formation of an identity that recognizes and supports global citizenship.

The Gateway: Walking where People took their First or their Last Steps in Canada

Museum visitors could feel the weight of what it was like to walk in the same space and place where those who came before them took their first or last steps in Canada at Pier 21. Connor reveals that The Gateway is the most unchanged section of the museum, giving Pier 21 visitors a true and authentic learning experience.

Warner and Myers (2010) explore the importance of space and place in teaching by exploring student engagement and the development of creativity. They advise educators “to examine what is being taught, how it is being taught, and how the development and growth of creativity should be woven into the educational fabric of teaching and learning” (Warner & Myers, 2010, p. 29). Bednarz and Kemp concur and state, “To geographers and other scholars engaged in “the spatial turn,” being able to think in, with, and through space, that is, to be spatially proficient, is increasingly valuable and generative” (2011, p. 18).

Watch the video below to see and learn all about this unique arrival and departure space.

Connor explains that while signs around Pier 21 included various languages, two of the most important tests travellers had to take upon their arrival in Canada were performed in English. Crowther and Tett (2012) explore power, citizenship, and confronting social, political, and economic inequalities and write, “The skills of reading and writing are important for an active and informed citizenry” (p. 118). Crowther and Tett continue, “Inequalities in powerful forms of literacy, differential access to information and the application of persuasive communication skills must be considered as part of the way that wider inequalities of power are systematically reproduced” (2012, p. 119). Thus, in terms of total and equal integration within a new society or country, language educators must keep in mind that new language learners need literacy and language to serve them beyond reading, writing, and basic communication skills. Language learners need literacy and language to aid them in their total integration within their society in order to help them achieve active citizenship.

The Assembly Hall’s Photo taken in the 1930s

Connor leads her group of museum-goers into a room where a large 1930s photograph is displayed large and clear. Rather than launching into an explanation, Conner asks for the visitors’ emotional and thoughtful response to the photograph. Connor allows the museum visitors to emotionally and intellectually interact and develop personal meaning with the display to enhance their viewing and learning experience. When writing about visual literacy, Serafini writes, “Visual literacy is about the process of generating interpretations from the meaning potentials available when transacting with visual images and multimodal ensembles” (2014, p. 23). Serafini (2014) continues, “The meanings constructed by audiences of digital and print-based media are shaped by particular worldviews, positions, values, ideologies, and experiences” (p. 25). The following video presents the interactions and reactions museum-goers have with the photograph at The Assembly Hall at Pier 21. Watch the video and listen to how audience members engage in conversation with Connor to convey meaning-making.

Photographs from the Canadian Museum of Immigration at Pier 21

Immigrants’ Stories: Upon Arriving in Canada

The following photographs display benches on which travellers settled waiting for the next steps and procedures they must go through upon their arrival in Canada. The first procedure travellers had to go through was baggage check. The baggage check is showcased through a collection of images in the second photo. The third photograph in the Upon Arriving in Canada series is of a little girl’s arrival story. Check out the third image below to learn about Angelina and the walnuts. 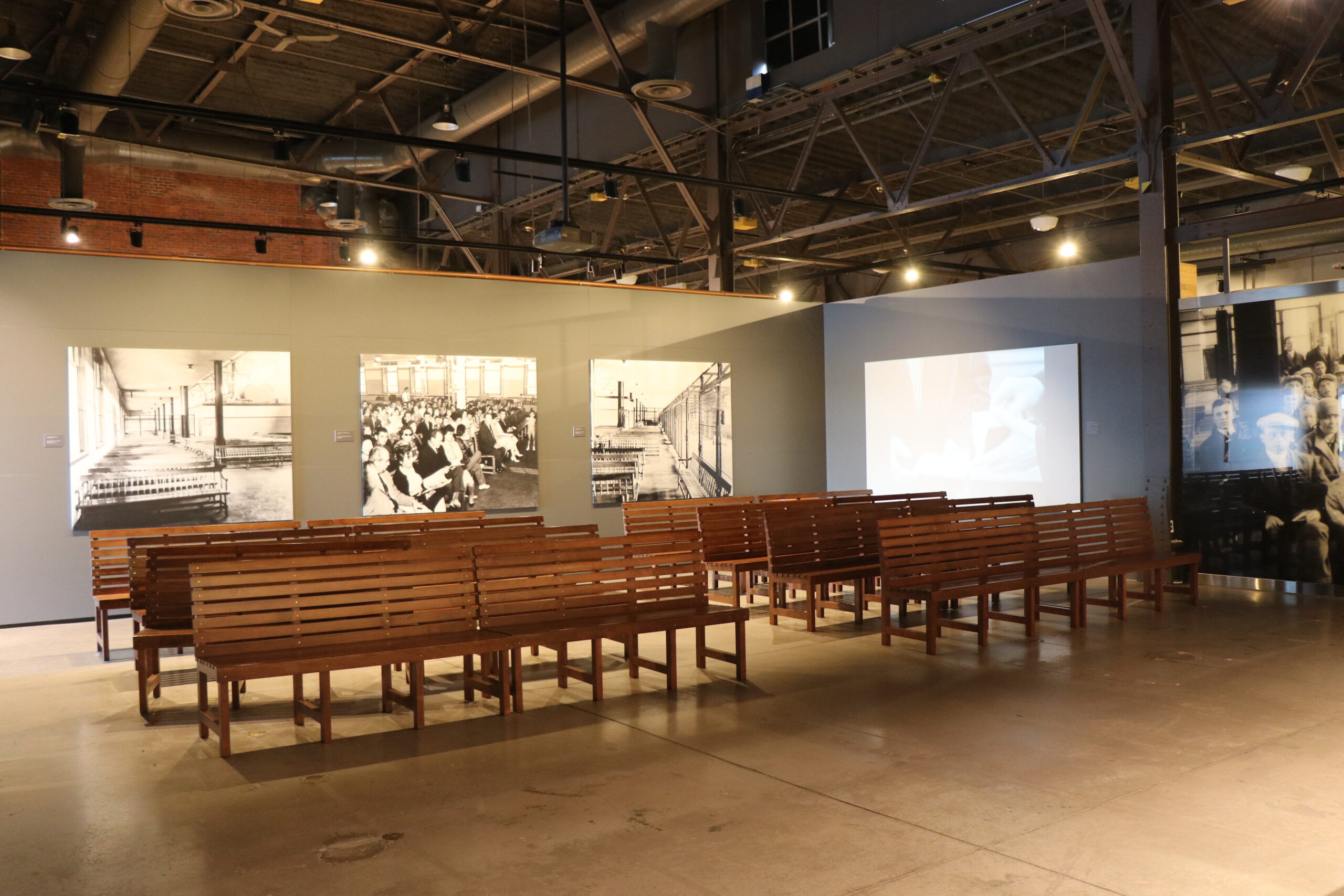 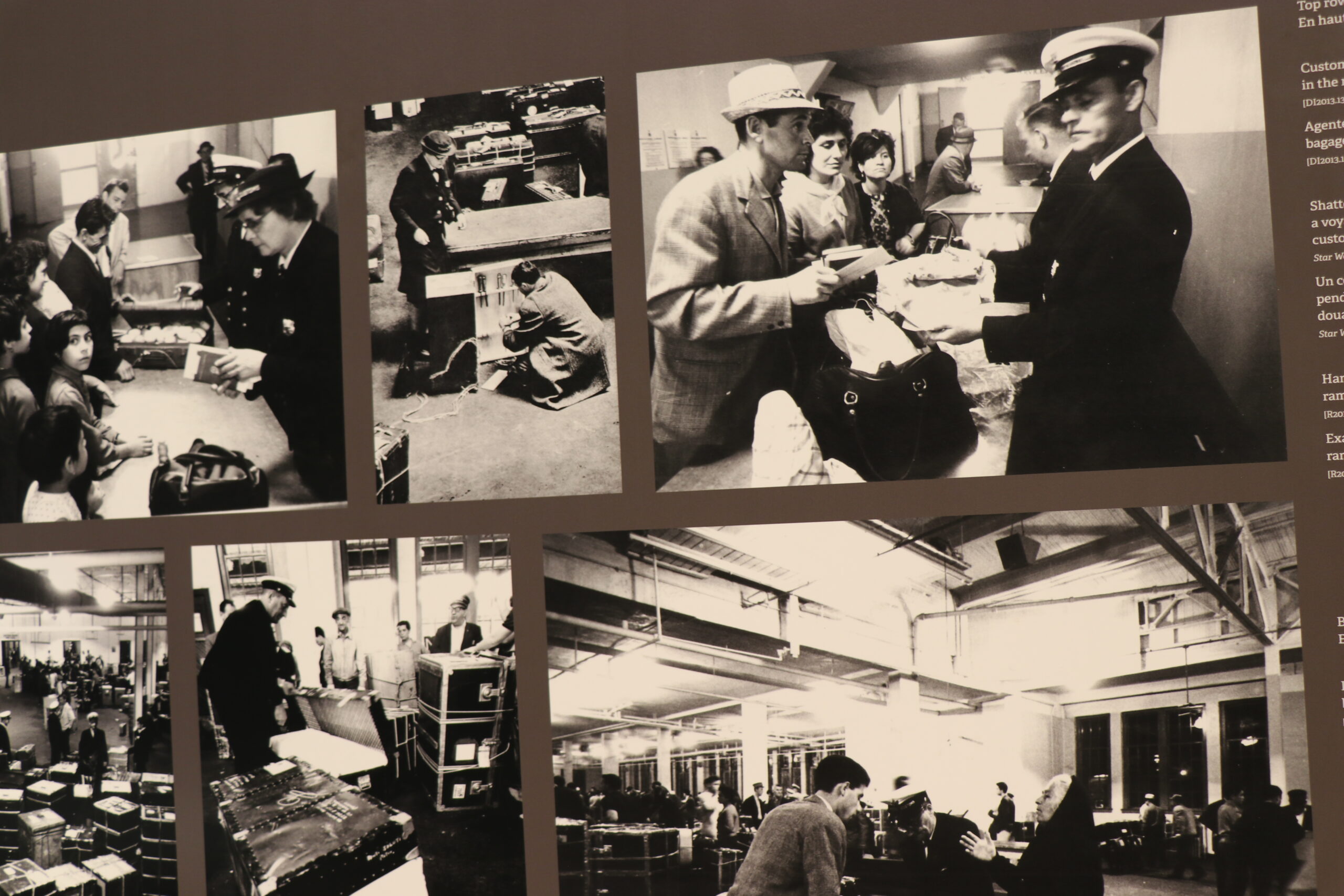 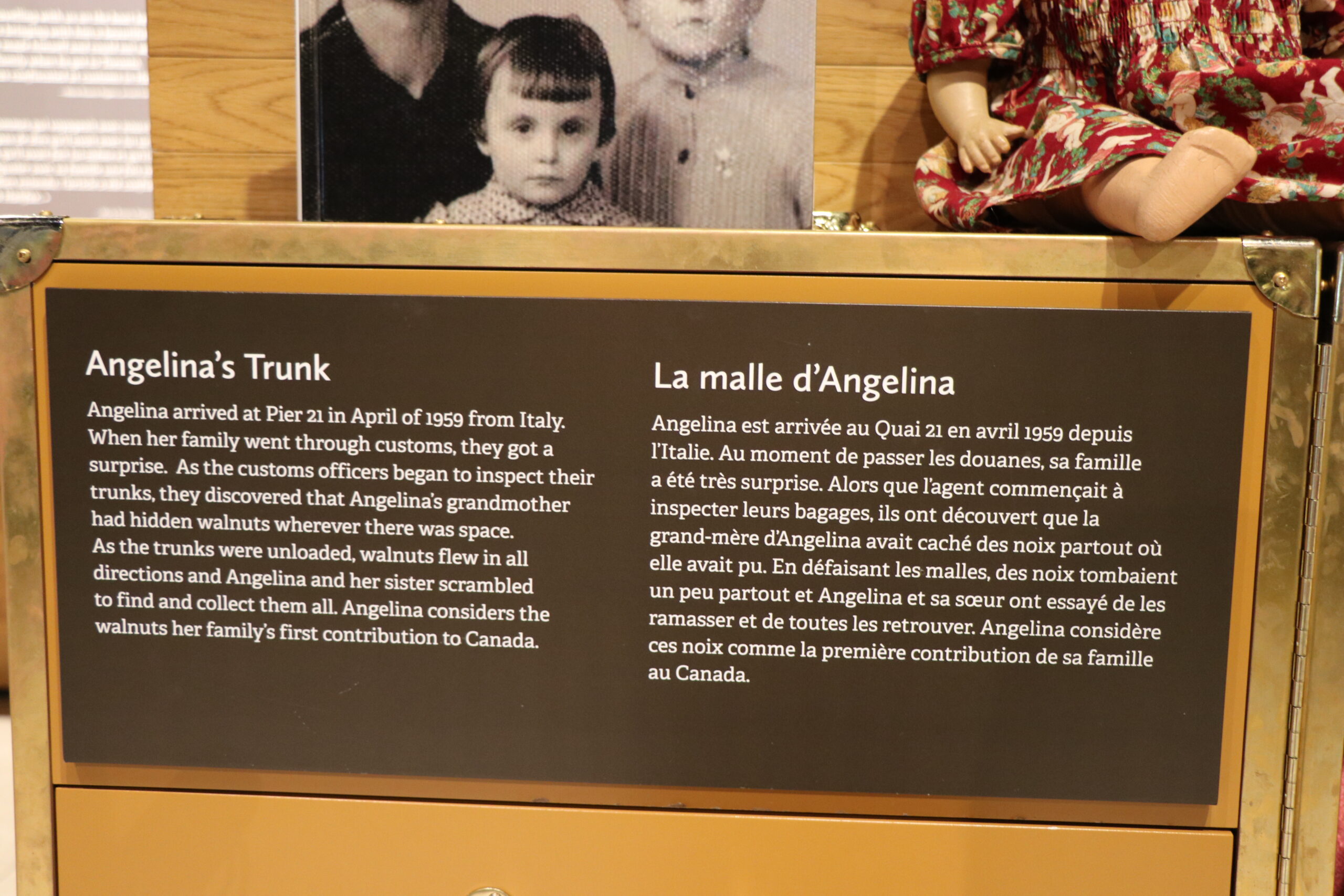 The following photo series showcases various displays relating to the waves of immigration to Canada, the United Nations Immigration Convention, and deportation.

Check out the first two images to learn about immigration patters and the spikes in immigration between 1860 and 2020. 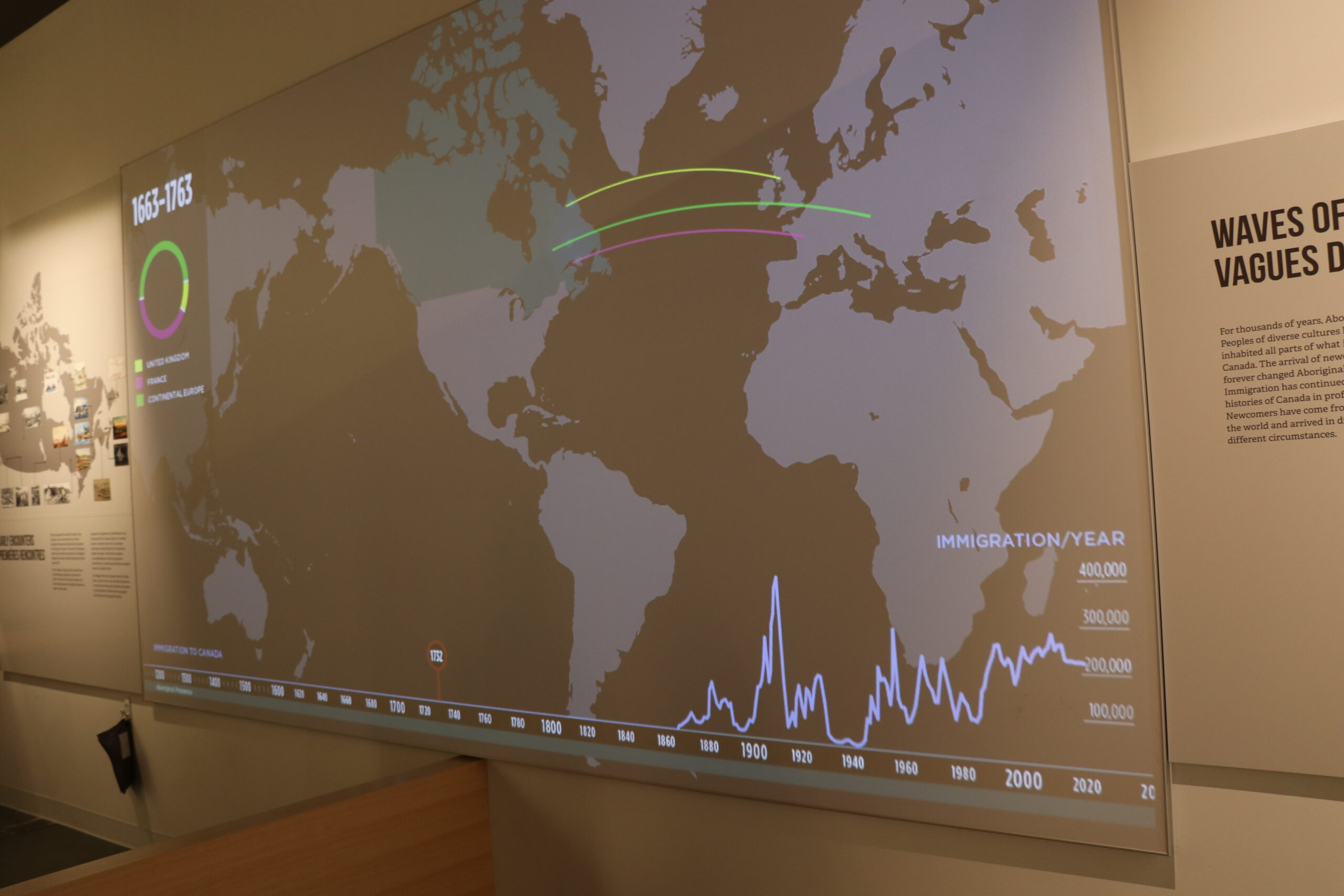 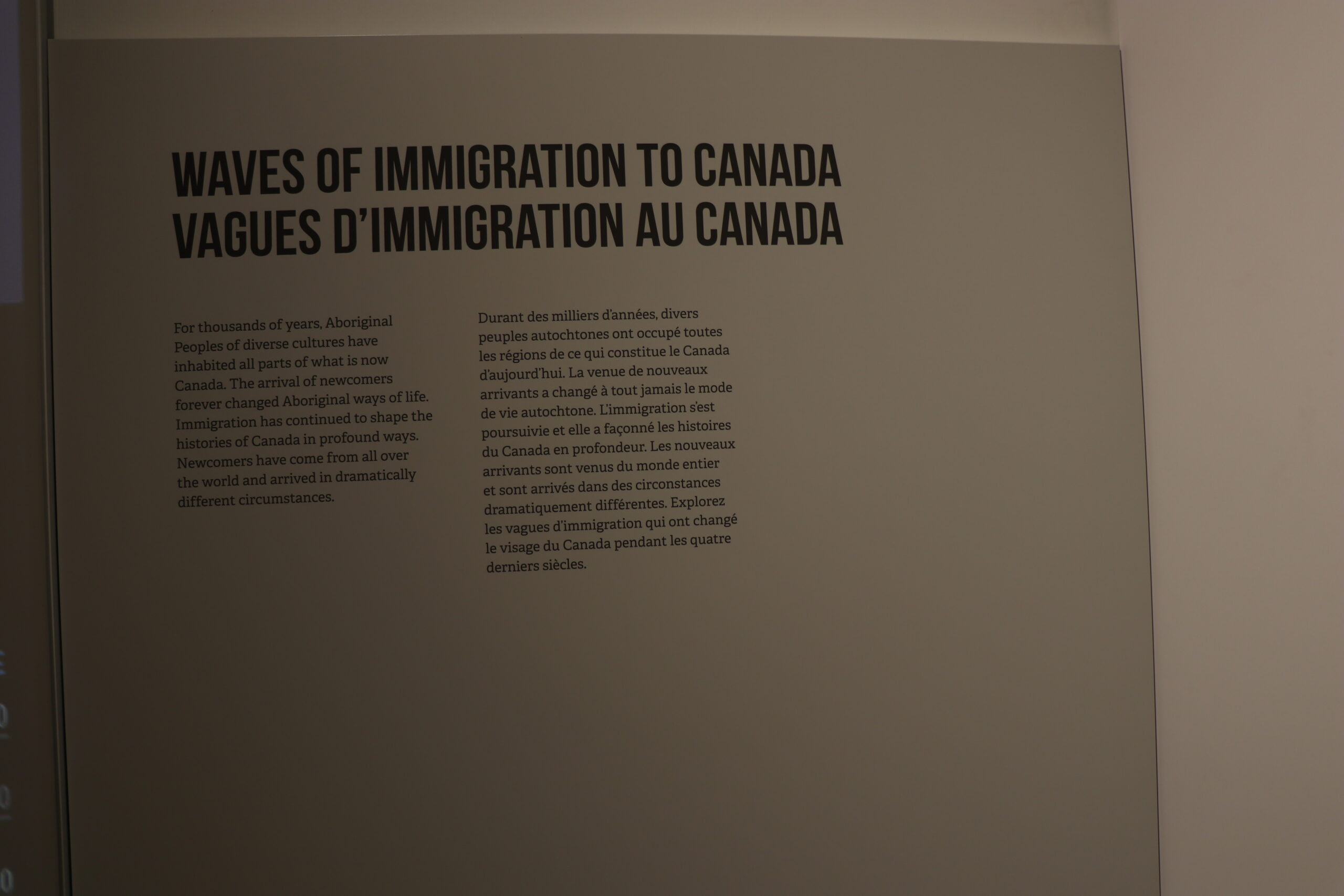 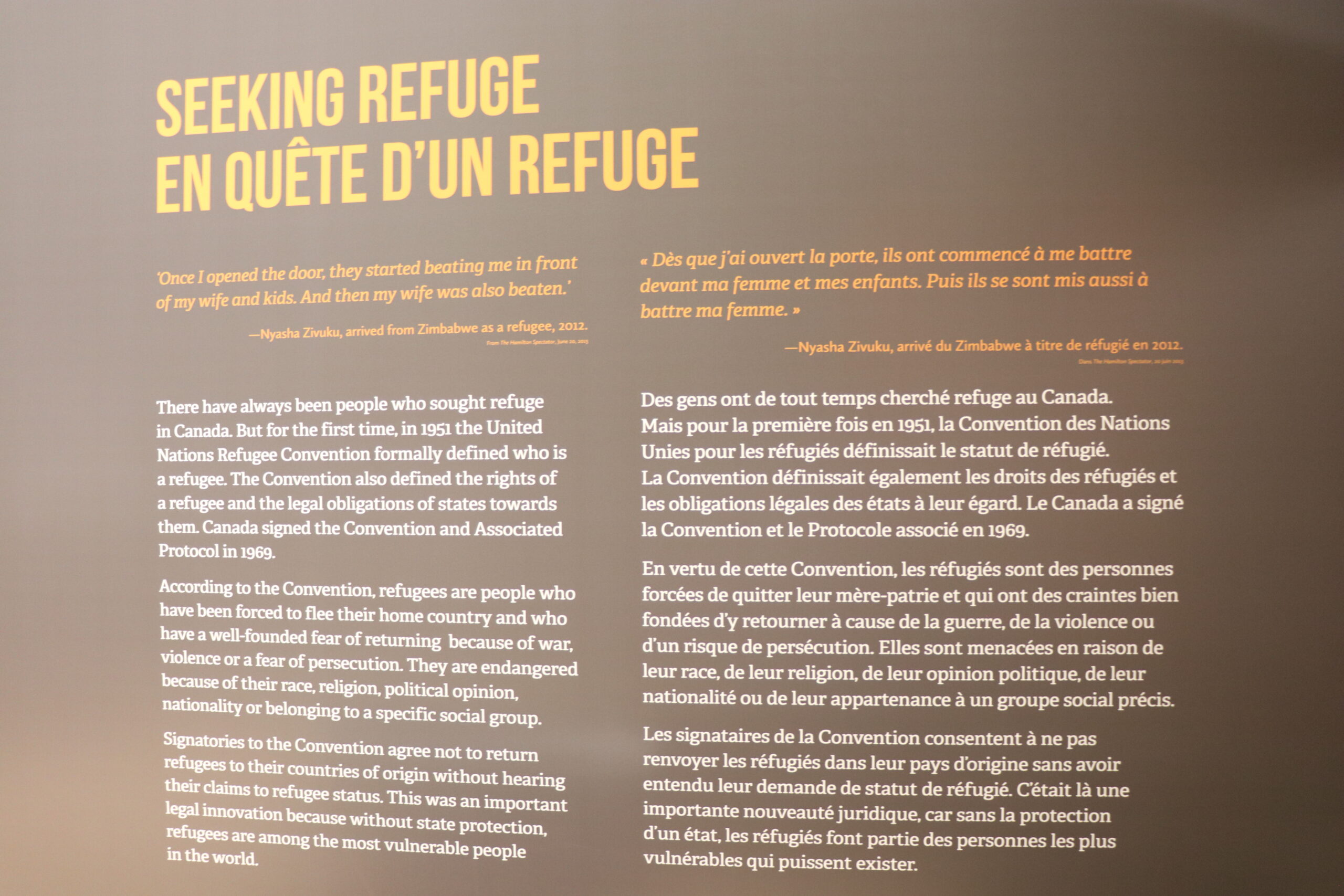 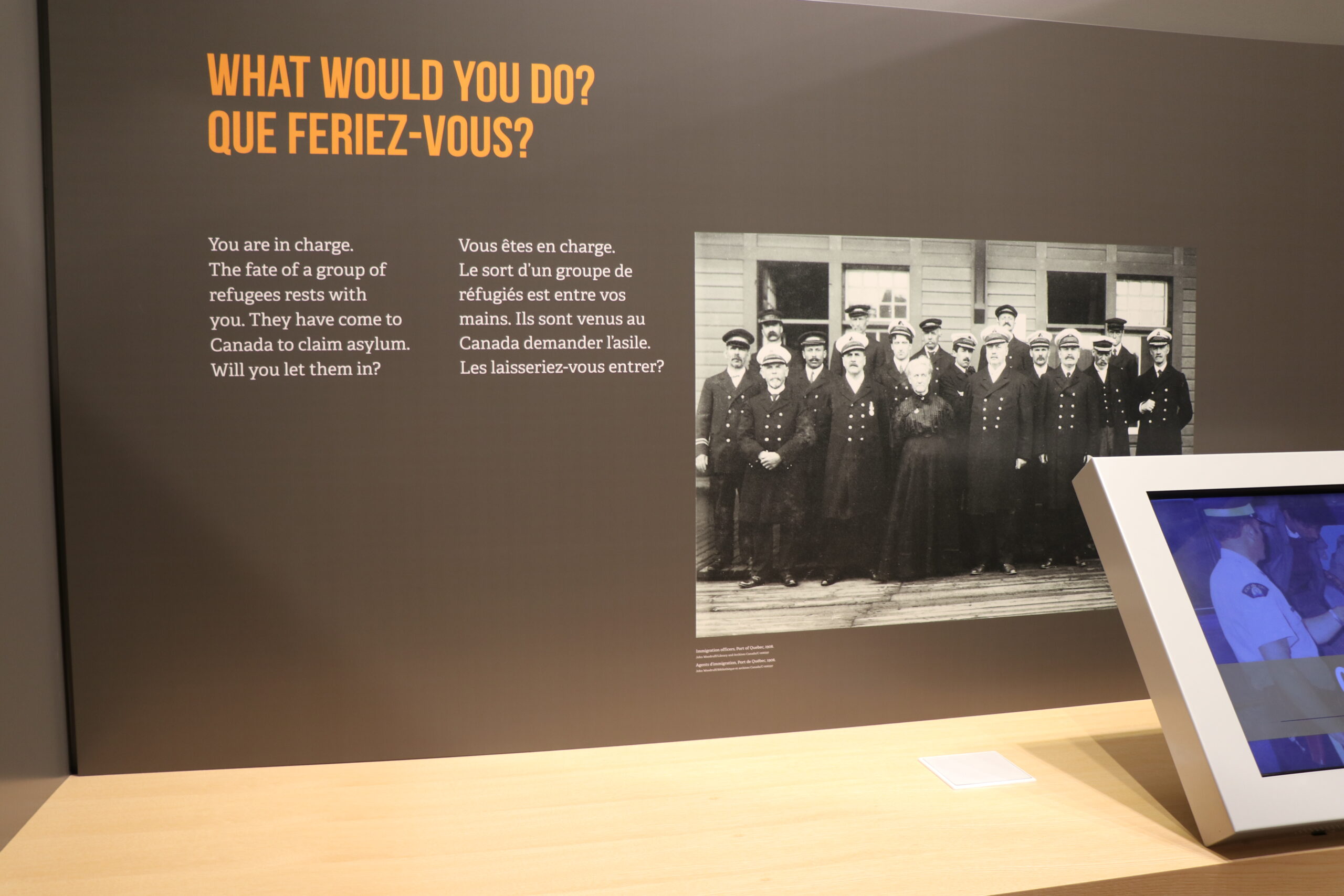 This is the link to the Canadian Museum of Immigration at Pier 21, located in Halifax, Nova Scotia, Canada. This website offers much to discover for educators in both English and French: https://pier21.ca/

Here is a link to the Refuge Canada Travelling Exhibit, available in English and French, which includes lesson plans for teachers: https://pier21.ca/host-refuge-canada-our-newest-travelling-exhibit